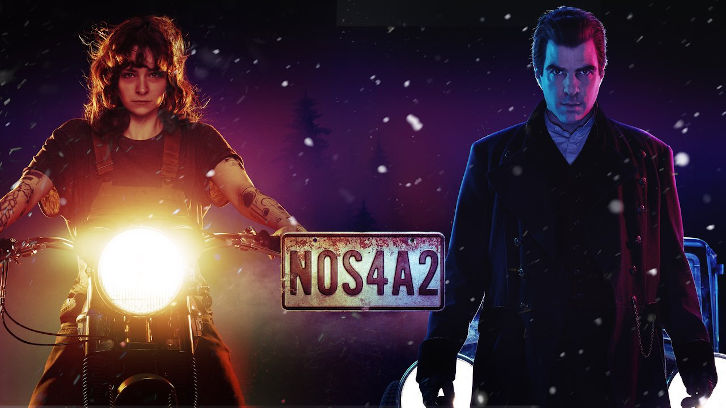 CAUTION: SPOILERS WILL BE REVEALED. PLEASE DON’T READ IF YOU HAVEN’T VIEWED NOS4A2 2×10 Bats yet!

Season 2 of AMC’s adaptation of Joe Hill’s NOS4A2 gets a fragmented epilogue after last week’s thrilling climatic episode. The cliffhangers here beg for a season 3 renewal, but the decreased viewership this season suggest it is not a guarantee (hopefully, AMC will announce their decision soon).

One thing that surprised me about this season (possibly series) finale was how little Charlie factored in. His demise was pretty imminent from the previous episode. Once Vic decided to ride back into Christmasland after delivering Wayne to Lou and Tabitha in the sunny “real world,” the only fear I could feel was wondering if now we were about to be subjected to an overblown nighttime chase scene that would last the rest of the episode. Thankfully, the producers realized that would be the wrong approach and got the explosives out of the way within the first act with Charlie blown back to whatever Netherworld vampires go to when their inscape and cars they have an energetic connection to are destroyed, Maggie saved, Wayne traumatized and still craving sugary (and Christmas) goodness, Millie basically homeless, and Tabitha extremely busy trying to figure out what to do with all of the former vampire children after destroying all of the ornaments containing their souls on the trees. Maggie and Vic even almost instantly recover from what could’ve been mortal physical wounds from the previous episode- TV style!

One would think this would be the happy ending we’ve all been hoping for after all this mayhem.
But, as we already know, happy endings aren’t exactly Joe Hill’s (or his father’s) forte. Sure, Vic and Lou try to create the appearance of “normal” in the dinner scene and Vic’s mother, Linda, patch things up while cleaning up Chris’ belongings. It was nice to see Linda finally being supportive of her daughter’s feelings after being portrayed as a suppressant for the past two seasons. Tabitha finds Maggie’s magical scrabble piece bag, but it is clear their relationship might not be the same going forward. Both Vic and Wayne turn to visual art to heal from their horrific experiences.

But, the spirit of Christmasland still lingers. Vic can see that the rather deceptive Wayne still pines for the spoils of being apart of Christmasland the way a heroin addict cannot seem to kick their habit completely. She doesn’t know that he meets with Millie in one scene where Charlie’s daughter seems to have changed her mind about moving on from her father’s work to live a mortal life. Nope, she wants to rebuild Christmasland for herself (but, of course she does!). Wayne’s Christmas-themed drawing is possibly enough for her to decide to relocate the family to Haversberg, Massachusetts after the remains of the Wraith and Charlie’s corpse somehow manifest themselves there. I personally don’t blame her. A change of scenery might be the only thing to save family’s sanity at this point. From here, it’s pretty standard horror epilogue/cliffhanger fare. If you watched Game of Thrones, you know what to expect.

Watching the Wraith get crushed, I was wondered if we would get a fun homage to Christine where a metal rod might move on its own after being refashioned into a junk cube. Sadly, this would-be-reference might be saved for a another time if the series gets picked up for more seasons. I was glad to see Maggie riding up in the supposed “out of order” elevator. I knew the Hourglass fellow wasn’t completely dead, nor was Maggie finished with the magical realms. Seriously, what else does she have going on?

We concluded with two randy teenagers pulling up to what used to be Charlie’s inscape in a truck. They think nothing is there, until something jumps on the back of the truck. They think it’s an animal, but, of course, that is only wishful thinking. Next thing we know, we see Millie punching through the windshield, hungry for mortal blood and who knows what else…..until next season!

Based on this vastly-improved season, I hope we get to find out. 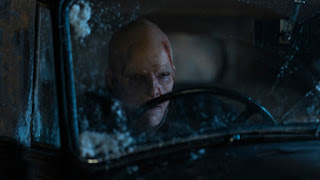 Is How to Get Away with Murder Renewed for Season 7 or Canceled?

May 12, 2020 Road Dog One
[ad_1] Overnight Cable RatingsThese will be posted later around (9pm-10pm GMT)About the Daily RatingsEach day (except Sunday) during the main
Hot News

’90 Day Fiance’ spoilers: Have Avery Warner and Ash Naeck broken up? Is the ’90 Day Fiance: Before the 90 Days’ couple still together?