One of the pleasures of the new HBO MAX streaming service is being able to sample episodes of quaint, older shows after you are done watching new, dynamic HBO episodes. Such is the case with the newest episode from the final season of Room 104. After viewing 4×05 “Oh, Harry,” which is basically a replication of the classic 90s sitcom genre, I immediately scrolled my cursor over to the Looney Tunes section. I fastidiously began searching for the classic 7 min toon, “Duck Amuck,” which this episode sort-of reminded me of. You could also make connections of the episode to an (almost) forgotten early-90s sitcom called, Hi, Honey, I’m Home!, except that involved a 50s sitcom family trying to adjust to the 90s. This was simply a 90s sitcom family just adjusting to life in Room 104, where time doesn’t really exist, which I’ve drawn the conclusion to.

Written and directed by by The One I Love and Horse Girl producer Mel Eslyn (who also directed season 3’s finale, “The Specimen Collector,”) “Oh, Harry” represents the first comedic episode of Room 104‘s final season. Those usually end up being the weakest episodes of the series for me, but after the four episode dramatic assault for the past month, it actually felt refreshing to see former Weeds and Man with a Plan star Kevin Nealon ham it up as sitcom character Harry (whose actor name is Chris Carrington.) In addition, we have his incredibly 90s blonde sitcom wife, Linda (Erinn Hayes) played by Kate West, daughters Jules (Sadie Stanley) portrayed by Ashley Kaul, Maddie (Skylar Gray) played by Sarah Elizabeth Woodard, and son, Will (Jason David) payed by Ryan Parker, and handyman Charlie (Ron Funches) by Edward Miller.

Those character actor names have no real significance as far I as could tell. Eslyn goes so far to spend several minutes presenting a stereotypical 90s sitcom-style opening credit sequence where we are given far more backstory as to how this sitcom family got stuck living in Room 104 than almost any group of character in the entire series. This basically involves them staying in the motel room while their house gets worked on while a cheesy expository theme song and fonts serenade us with their retro glory.

These being your average sitcom characters, none of them are presented in a realistic fashion. Harry and Linda clearly have some marital issues and clearly dislike raising their children, yet talk about it superficially, like anger isn’t a real emotion, only something to be glazed over and not taken seriously. Everyone talks in quips and double entendres in way that even the teenage daughters feel that their words were written exclusively by sarcastic middle aged men working in Burbank. The secondary handyman character shows up when the narrative is convenient for them to enter and exit, always smiling and promising relief from the central conflict. There are strange continuity errors, like when a balloon suddenly changes color. And, yes, there is a traditional laugh track that does the laughing for us, the audience.

Almost nothing these characters say are really that funny (one could make the same argument for actual sitcoms of yesteryear). Something that surprised me in this uncanny depiction was how sincere this homage felt. It felt as though Eslyn felt the need to make a genuine sitcom out of this episode and not just an ironic caricature (yes, I’m looking at you, BoJack Horseman!) with a wink and nudge for the educated HBO audience. The hair styles, blocking, wide framing, and wardrobe all ring true for anyone who actually were subjected to 90s sitcoms in their developmental years (myself included). Those shows definitely had a psychological impact on those old enough to have watched them on their original airdates.

In that aspect, Eslyn has succeed admirably. The laugh track vocalizes our frustration at following characters who only synthesize fractional amounts of human emotion, reminding us that we are watching an actual show, not just a show within another one. Harry cannot even use inappropriate language without being bleeped by the unseen censors.

This being Room 104, things don’t stay cute and quasi-funny for long and end up looking more like a homage to David Lynch’s Inland Empire more than anything. A magazine changes for no reason, showing Harry things are not as they seem. Through a complicated series of comedic missteps, Harry is ends up opening a flimsy door, causing a bowling ball to fall from a shelf directly onto the back of his neck and cranium, without causing any bleeding, bruising, concussion, or even becoming paralyzed. Despite eschewing these realistic consequences, Harry gets up and suddenly starts questioning his identity and existence. This just gets acknowledged by his family members and mocked for comedic effect. Harry is now acutely aware of the canned laughter and the censorship, as well as the pausing of the laws of physics since he cannot break the motel window with the aforementioned bowling ball after becoming frustrated. More interestingly, he cannot open the door to leave. He is trapped with his cloying, obnoxious family in the room. Why? Because that is what is in the script, silly.

Harry comes across a copy of the sitcom script while going through a stack of magazines and it blows his mind. He now knows what his family will say at any point. Now, the laugh track starts to distort the reality of the sitcom more than accentuating it. Harry is know separated from his reality like Adam eating the apple and gaining knowledge. I was halfway expecting Charlie to reveal himself to be a representation of Lucifer or something akin. No such luck. This sitcom sticks to its conventional guns. Not even removing a refrigerator door can interrupt its iron clad fantasy world. In this world, Charlie can come and go when the script says he can. Harry cannot, no matter how hard he tries. That is not what is written. No one is supposed to take him or his neuroses seriously, which works since it is comedic superstar Kevin Nealon, afterall. The sitcom father is always an idiot/failure at life who can only provide for a hopefully future for his impossibly incisive offspring and that is all the script wants him to be. Going off page and becoming aware is an impossibility for him. He has upset the balance of time and space.

Now, we feel like we are in a more conventional version of David Lynch’s Rabbits sitcom where nothing said makes any cognitive sense and the sitcom status quo conventions cannot be broken through. The laughter now spends chills down your spine. This causes fright and bewilderment, which is not welcomed in sitcoms. The cheesiness is now discomforting, like a thriller. These colors cannot run together.

Like in previous episodes, the motel bathroom is treated as a refuge from the madness happening in the main room. This is meant to be a “a very special moment” in this sitcom. Harry thinks he can plan and make a mad dash for the gates without his proverbial leash being being pulled. The family don’t try to empathize, but instead agree with him on the surface, but don’t try to move past anything, like good sitcom characters would. When he tries to escape, all he can do is perform comedic pratfalls with no physical consequence at all and earn his family’s sympathy for just being the screw-up he was envisioned to be, similar to Bugs Bunny making Daffy Duck a multi-colored follower creature in “Duck Amuck.”

Harry has no free will and no real conscious. This is when the camera draws back and shows us- Inland Empire-style – the live studio audience that’s been watching the whole time. Harry hasn’t seen these people before, only the representation of what is supposed to be their laughter at him and everything he thinks he knows. He knows he exists to perform. Yet, he can do nothing but fail since that is by design. In the end, the sitcom wins and the status quo reigns. The comedy comes full circle, even if none of it seems natural and somewhat realistic anymore. The script’s structure and pace will have their way no matter what. But things can never be the same. The illusion has been broken, but that doesn’t mean the different levels of reality cannot co-exist. Nothing can break away in this artificial environment. This isn’t real life.

The sitcom doesn’t feel real since its tropes and conventions were rejected long ago by an unforgiving audience. They saw themselves and sitcoms are not what they saw. They knew how to play along as the stereotype, but know real people are not only defined by quips and beaming on the surface. We are products of our environment, but we are not products. Television characters are just that; objective rather than subjective. They cannot really grow and change. They just are there for our amusement. Harry doesn’t get amnesia from the bowling ball, to use another television cliche, but the confusion he receives is only temporary. By the end, he’s hurt again and all goes back to normal. Like Sartre wrote, “no exit.” No one can escape how others perceive them completely. The audience is always there, but this audience is slightly more knowing. This isn’t TV, after all. It’s HBO. 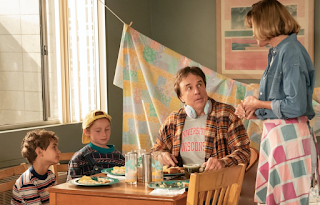 June 8, 2020 Road Dog One
[ad_1] Welcome to Today's Open Discussion Thread. You can talk about anything you like here, however you still need to
Hot News

May 11, 2020 Road Dog One
[ad_1] Press ReleaseEpisode 5Lyn is MIA, playing politician’s wife, as Emma is left to run Drag King Night at the

‘RuPaul’s Drag Race,’ ‘All Stars’ and ‘Untucked’ renewed at VH1