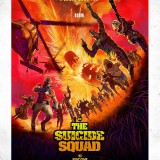 EXCLUSIVE: We hear that Doctor Who actor Peter Capaldi is boarding James Gunn’s The Suicide Squad at Warner Bros. We also hear that Saturday Night Live‘s Pete Davidson has been in talks for a small cameo in the pic, and there’s a chance he’ll do it during breaks from SNL. That deal still is coming together. Details on the actors roles are not being revealed.

Word is that there’s a table reading for the DC sequel on September 11 with production starting 12 days later at Pinewood Studios in Atlanta for an August 6, 2021, release.

EXCLUSIVE: Deadline hears that the Thor: Ragnarok, and Thor: Love and Thunder filmmaker, Taika Waititi, is in talks for a role in James Gunn’s The Suicide Squad at Warner Bros. No word on what part, or how big.

EXCLUSIVE: We’re also hearing that Nathan Fillion will be starring in James Gunn’s The Suicide Squad at Warner Bros.

The actor’s role is being kept under wraps.

We’re hearing buzz that Agee will provide the voiceover to super-villain King Shark, who is a humanoid.

Borg’s role is being kept under wraps, but we hear he’s playing a love interest to one of the characters in the Warner Bros release.

Storm Reid, the actress who starred in A Wrinkle in Time and now appears on HBO’s Euphoria, is joining the heavy-hitting cast of Warner Bros.’ The Suicide Squad.

Plot details are being kept under wraps, but it is known that Reid will play the daughter of Elba’s character.

Source:
The Hollywood Reporter
10th May 2019 – Michael Rooker in Talks to Join Cast

“Guardians of the Galaxy” alum Michael Rooker is in talks to play King Shark in James Gunn’s “The Suicide Squad,” an individual with knowledge of the project exclusively told TheWrap.

Newcomer Daniela Melchior looks to be the latest addition to the team, as sources tell Variety the Portuguese actress has been tapped to play Ratcatcher in Warner Bros. and James Gunn’s “The Suicide Squad.” She will have some connection to whomever Elba ends up playing

David Dastmalchian has closed a deal to star in James Gunn’s The Suicide Squad, with sources saying he will play the comic book villain Polka-Dot Man.

Sources tell Variety that John Cena is in talks to join Idris Elba and Margot Robbie in Warner Bros.’ follow-up to 2016’s “Suicide Squad.” It’s currently unknown who Cena and Elba will be playing.

Sources now tell Variety that all parties including director James Gunn have decided to move on from the Deadshot character, with Elba playing a new character in “The Suicide Squad.”

It is unknown what character Elba would now be playing, but after taking the last few weeks to discuss, everyone involved felt this was the right move. The team also did not want to feel as if it was disrespecting Smith, who helped bring this character to life for the first time, by replacing him with Elba.

Oscar, Tony, and Emmy winner Viola Davis will return as Amanda Waller in James Gunn’s “The Suicide Squad,” an individual with knowledge of the project exclusively told TheWrap.

In a new interview, Jai Courtney was asked about Suicide Squad 2

“I felt a bit weird the other day when I dropped that because it was funny I was just like ‘Yeah, I’m coming back,’ and I couldn’t even remember if I was supposed to say that or not. For a long time I wasn’t even sure if (my return) was going to be the case or not… I got sent the script. It’s a great (script), I was surprised by everything (in it).”

Ratcatcher, will be gender-swapped and played by a woman. Ratcatcher is is a super-criminal and one of Batman’s many enemies.

Nanaue, aka King Shark, is a super-villain and humanoid shark.

Polka-Dot Man, aka Mister Polka Dot, is a Gotham City super-villain and like Ratcatcher, a sworn enemy of Batman.

Peacemaker, aka Christopher Smith, is an agent of peace whose motives are driven by an extremist form of pacifism that makes him love peace so much he would kill for it. Peacemaker is the role that sources say Gunn likes for Dave Bautista.

Gunn is said to be using mostly DC characters who did not appear in David Ayer’s 2016 film, although several are expected to return, including Deadshot, Harley Quinn and Rick Flagg, originally played by Joel Kinnaman, say sources. Another source, however, says Flagg is no longer in the follow-up.

Source:
The Hollywood Reporter
6th March 2019 – Idris Elba in Talks to Replace Will Smith as Deadshot

Sources say that Idris Elba met with Gunn on Friday and it went so swimmingly that talks began with the studio in earnest. Elba was the first and only choice for James Gunn and the studio.

Warners is extremely high on The Suicide Squad and its script, written by Gunn, so much so that the project is barrelling forward into the casting stage after Gunn quickly turned out several drafts.

Sources tell Variety that Will Smith, who played Deadshot in the original, is expected to not return for the studio’s upcoming sequel. Sources say scheduling was the ultimate factor and that the decision was made on amicable terms between both sides with no hard feelings.

Though the studio has never confirmed who would be returning for “The Suicide Squad,” insiders say the studio has always wanted its biggest stars like Smith and Margot Robbie to return while figuring out other casting decisions along the way.

UPDATE: I have learned from sources close to production that in fact, the information about Harley Quinn being absent from the new Suicide Squad movie is no longer up to date — she is indeed expected to appear in James Gunn’s The Suicide Squad, which is expected to begin production later this year.

James Gunn, who was fired from directing the third installment in his Guardians of the Galaxy franchise, is in negotiations to helm the second Suicide Squad film.

The sequel has the title of The Suicide Squad and is not being labeled a direct sequel but as a relaunch. Sources say that Gunn’s focus is to take the franchise in a new direction with mostly an all-new cast of characters and actors. Sources also say that the project is also very much rooted in Gunn’s vibe, as seen in the Guardians movies.

The Suicide Squad on Aug. 6, 2021. Charles Roven, Peter Safran are producing, and James Gunn is penning the script.

DC Super Pets is opening May 21, 2021. It takes the place of a WB event title on that date. Jared Stern and Sam Levine direct.

EXCLUSIVE: James Gunn has been hired by Warner Bros and DC to write and possibly direct Suicide Squad 2. It’s the first job he’s taken since he parted ways with Disney, which let him go from the lucrative Guardians of the Galaxy franchise in July in the wake of old controversial tweets that had been resurfaced.

Source:
Deadline
Studio sources say the Gunn is not developing a “sequel” but a brand new take on the DC property, which features DC villains Deadshot, Harley Quinn, the Joker, Captain Boomerang and Killer Croc, who are forced into the service of the government in exchange for lighter sentences.
Source:
The Hollywood Reporter
8th June 2018 – David Bar Katz and Todd Stashwick to Co-Write Script

David Bar Katz and Todd Stashwick are co-writing the script for the Suicide Squad sequel alongside director Gavin O’Connor, sources confirm to The Hollywood Reporter. The film is a followup to the 2016 DC hit that starred Will Smith, Margot Robbie and Jared Leto and was directed by David Ayer.

EXCLUSIVE: Warner Bros and DC have chosen Gavin O’Connor to direct Suicide Squad 2, the sequel to the hit that will bring back Will Smith, Margot Robbie, Jared Leto and the rest of the gang of villains. The decision was made today. O’Connor most recently directed the hit The Accountant for the studio, and he is working on a sequel with Ben Affleck.

Pending the final signing of the deal, this ends a lengthy search by the studio to replace David Ayer, who wrote and directed the original but moved aside to focus on Gotham City Sirens, one of the DC spinoff movies built around Robbie’s Harley Quinn character. O’Connor was mentioned on a short list that the studio was deciding between. Warner Bros has eyed strong action directors like Mel Gibson and then had its sights set on Jaume Collet-Serra, who became unavailable when he agreed to direct Dwayne Johnson in the Disney film Jungle Cruise.

Source:
Read More on Deadline
Gavin O’Connor, who directed Ben Affleck in the hit action-thriller The Accountant, has been tapped to write and helm Suicide Squad 2.

It is unclear when the Suicide Squad follow-up will shoot. The cast is expected to return for the sequel, but scheduling will be an issue with the stars’ packed schedules. Will Smith is currently filming Aladdin and then is set for Ang Lee’s Gemini Man, while Robbie is currently filming Mary Queen of Scots.

EXCLUSIVE: Jaume Collet-Serra has been set by Disney to direct Dwayne Johnson in Jungle Cruise. This means that Collet-Serra will withdraw from Suicide Squad 2, the Warner Bros sequel for which he was top choice. After directing a bunch of hit movies that included last summer’s sleeper The Shallows, Collet-Serra has been poised to take that step to star filmmaker, and numerous studios chased his next slot. He decided that the opportunity to originate a new Indiana Jones-like action-adventure franchise in lockstep with one of the most globally bankable film stars — like Gore Verbinski did with Johnny Depp in The Pirates of the Caribbean — was a better opportunity than continuing a storyline originated by another director. Production will begin late next spring.

EXCLUSIVE: The Shallows Jaume Collet-Serra has emerged as frontrunner choice to direct Suicide Squad 2, the next installment of the 2016 Warner Bros DC film that grossed $745 million worldwide. The studio looked at a number of filmmakers — Mel Gibson among them — but sources said the studio is focused on Collet-Serra to take the reins of a franchise that has Will Smith, Margot Robbie back in the ensemble. The original, written and directed by David Ayer, was about a group of incorrigible jailbirds with special skills who were conscripted to fight terrible villains with the idea the heroes were expendable. The first film wasn’t a favorite of the fanboy crowd, but it a big global financial hit for the studio that left no doubt of future installments.

Collet-Serra, the Spanish director who broke into Hollywood with the genre hit Orphan and followed with the hits Non-Stop and The Shallows and has upcoming the 2018 Liam Neeson starrer The Commuter.

Adam Cozad, who wrote The Legend of Tarzan for Warner Bros., is in negotiations to pen the studio’s sequel to Suicide Squad.

The follow-up is a priority for Warners, which made overtures to several directors, including Mel Gibson. No filmmakers are currently attached, and the studio is focusing on nailing down a story.

David Ayer is not returning for the sequel, and is instead focusing on developing Gotham City Sirens, a project that reunites him with Robbie and focuses on the female villains of the DC Universe.

Warner Bros. is courting Mel Gibson to helm Suicide Squad 2 and the sides are early in talks, The Hollywood Reporter has learned. No official offer has been made nor has any commitment.

Sources say that Gibson is familiarizing himself with the material. But the studio is not being passive and is also looking at other directors, Daniel Espinosa among them.

Snowpiercer – Episode 1.08 – There Are His Revolutions – Promo + Press Release

Guess Who This Biker Boy Turned Into!