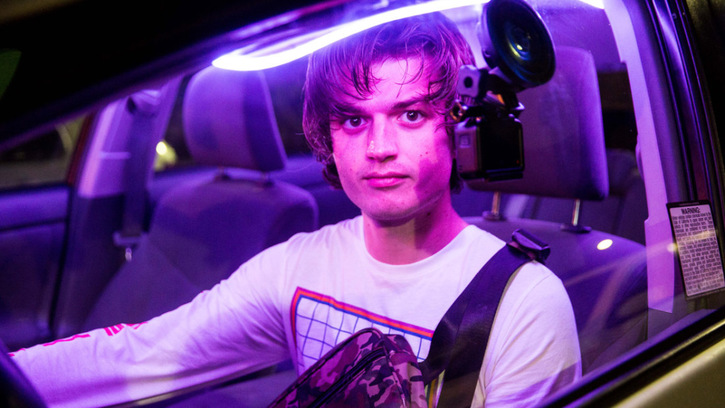 Spree feels like a movie that’s trying too hard to please at pretty much every turn. However; this can at times feels intentionally so, as it also happens to be the aim of our main character (to call him a protagonist would be wrong), played by Stranger Things’ Joe Keery, who is a deranged sociopath who will do anything to get viral. His means of reaching the big time are horrifying and incredibly desperate: he resorts to putting up cameras in his Spree (an Uber-esque rideshare service) and killing any victim who gets in his car. Taking place over a single night, the stakes escalate and the film moves in several unexpected directions towards its chaotic, crazy ending that does its best to keep upping the ante at every turn.

Tightly placed and edited in a similar style to the excellent thriller Searching that came out a couple of years ago, filmed entirely through CCTV footage, dash cams and mobile phone videos, Spree borrows elements from the likes of Joker and Nightcrawler to incorporate into its script, acting as a dark commentary on the lengths of what people will try to do to go viral and achieve that once in a lifetime shot at global fame. Almost every major character in this film is utterly consumed by social media to the point where they’re portrayed as addicts, frequently filming on their phone to reach their followers. The belief of Keery’s character, Kurt Kunkle, is that if you don’t have a social media presence you might as well not exist. Unfortunately for him, only one person watches his videos despite years of content creation, and that’s an obnoxious teenager who he used to babysit and is now far more successful than him in the social media game.

The plot escalates in a clear, well-defined act structure eventually boiling over the top in terms of its sheer craziness – there were multiple moments during the film that I didn’t think it was actually capable of going there, and then it did take that direction, and it’s always smart enough to feel self-aware, making every character borderline unlikeable at best – hateable at worst. Yet I was never bored once through Spree, despite its many, many issues that make it a mixed effort from director Eugene Kotlyarenko. For all its flaws, it will at least entertain you.

The secondary cast – often passengers of Kurt’s car journey and frequent victims of his desire to get famous – don’t get enough attention to be developed aside from perhaps Sasheer Zamata’s Jessie Adams and completely feel flat and overlooked as a result. We have little sympathy for most of the lead characters and it’s one of those rare movies without a protagonist as such. In that regard it calls back to Michael Powell’s Peeping Tom, but lacks the staying power, as by the time I’d gotten home from my socially distanced screening, I realised just how little much of the film stuck with me as it just felt completely hollow and shallow. It balances its social satire with violence that often borderlines on overkill, and it’s safe to say that a lot of blood will be spilled over the course of the film.

Spree never turns off the cameras and they never stop rolling. You get a breath of fresh air when Kurt’s car pulls to a stop, a moment of respite from the chaos, but it’s only for a moment and it’s usually to pick up a new victim. But unfortunately, in terms of what the film is trying to tell, there’s nothing really new or original that it’s trying to say – the commentary on social media has been portrayed better and more effectively elsewhere and the film never quite escapes its repetitive feel despite trying to one-up itself at every turn, and you usually know what’s coming next before it happens even if there’s enough there on a surface level to keep you entertained while watching it.

As a result any authenticity is lost, and it’s mainly due to the always energetic Joe Keery, that the film is as enjoyable as is it is.

You can watch the trailer here.

USD POLL : What are your favorite non-biological parent (guardian) and child relationships on TV?

Rafael Nadal Pulls Out Of U.S. Open Over COVID-19 Concerns

Why One Throwaway Shot in Tenet May Be Christopher Nolan's Favorite