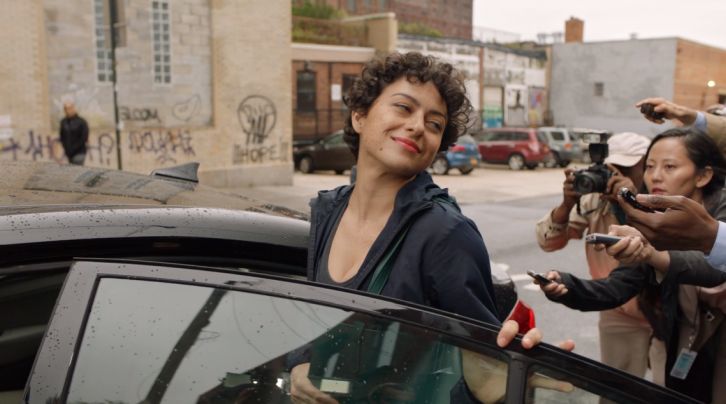 With the immediate fallout from Dory and Drew’s arrests done and dusted, the third season of “Search Party” has some time to kill before their trial begins. Unfortunately, that means these episodes – “A National Affair” and “Public Appeal” – mostly deal in meandering, possibly pointless subplots.

Dory is bouncing between highs and lows when we rejoin her in “A National Affair.” While she complains to Cassidy about the media mob camped out outside her apartment, it’s clear Dory does love the attention on some level, carefully applying dark red lipstick before going outside and striking a pose while she gets into her rideshare. But the sheen of the spotlight loses some luster when she’s accosted at the gym. Additionally, she’s startled by a visit from April’s twin June, who’s noticed her sister’s absence (this scene’s capper – June and April’s taunting ghost speaking in unison – is legitimately creepy). Dory’s also got a touch of paranoia, claiming to Cassidy that someone’s been breaking into her apartment and stealing her shoes. It could be dismissed as cabin fever or stress…except we see that the man who got Dory’s name tattooed on his knuckles is in possession of her kicks, and has a crazy wall collage of pictures of her.

In “Public Appeal,” however, Dory’s problems are closer to home. After a video of Dory trying to cheer Drew up with a slightly macabre ukulele song about their predicament goes viral, Cassidy decides they must do damage control with an interview on newsmagazine “American Hour.” And she wants Dory’s parents to join her. But given we learn that the Siefs found out about Dory’s arrest from their dental hygienist, it’s clear they aren’t close. And as Cassidy amusingly tries to prep the family (and sidebar – Shalita Grant is really fun in this role, such a 180 from what she was doing on “NCIS: New Orleans”), the tension builds between them until it finally explodes. “We’re the ones who should be embarrassed,” her father snits, tired of her attitude. “I left because you guys are so painfully sad,” Dory shoots back, angrily ashamed of her suburban roots.

But when we see snippets of the “American Hour” piece (with a perfectly cast Annette O’Toole (“Smallville”) playing the interviewer), it successfully portrays Dory as sympathetic and her parents as supportive. And given what we’ve seen of their real relationship – not to mention knowing that Dory is lying her ass off about her involvement in Keith’s death – when Dory starts sobbing and snuggles onto her mom’s shoulder…it’s kinda chilling. Shawkat, I’m finding, is really great at playing Dory when the light goes out behind her eyes, if you know what I mean, which makes Dory fascinating to watch even though she’s so frustrating a character. 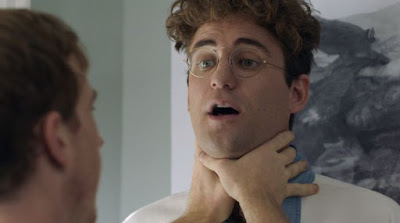 Drew doesn’t have much to do in “Public Appeal,” though he does get a tray of pasta from a fangirl, which irritates Dory and lets Cassidy make a point about the different way men and women are treated in these true-crime situations. But he does get a solo subplot in “A National Affair” and it’s terrible. Borrowing his brother’s ID so he can sneak out of state, he returns to his hometown so he can retrieve, we’re led to believe, an embarrassing video from a middle school buddy/bully. Though it’s not so much humiliating as horrifying when we see that it’s of Drew bludgeoning a swan with a golf club.

Nothing about this storyline worked for me. First off, the antics of the man-child bully are not funny, or even faintly amusing. Second, I don’t buy that, as nationally infamous as Drew is supposed to be, somebody in his hometown would be unaware of his alleged crimes. Third, this smells like something that will never come up again, even though you’d think this guy and his girlfriend would immediately sell the story to a tabloid. And finally, I don’t know what the show now wants me to think of Drew. It’s clear in the video that he was bullied into killing the swan…but he still killed a swan. Gross, dude!

Portia and Elliott’s stories in these episodes aren’t as bad, just kinda boring. After a screaming fight in “A National Affair” about Portia screwing over the others, they separate. Portia, for some reason, starts wandering the streets. Slipping into a church so she can charge her phone, she’s attracted to the priest’s sermon about abandonment and loneliness and decides to give Christianity a shot. So, in the next episode, she brings cookies to a church bake sale and tries to make friends, though she has little in common with these people. They do come to her aid when she’s accosted by the press so that’s nice. But I dunno, this seems too much like Portia’s storyline in season two – throwing herself into a new community to quiet her emotional stress – and I’m not finding that idea particularly interesting.

Elliott, meanwhile, busies himself planning his wedding to Marc. In “A National Affair,” the betrothed have lunch with Elliott’s parents, who are kind of awful and thus give us some more context for Elliott’s personality. And in “Public Appeal,” they meet with extravagant event planners who dazzle Elliott and Marc with an “attention”-themed wedding package. Two plot tidbits to remember for later. Elliot is approached at lunch by a conservative pundit seeking to interview him on her show, an offer he immediately rejects, but clearly starts to rethink. And in addition to setting them up with corporate sponsors “real excited about erasing their legacies of homophobia” to underwrite their lavish wedding, the event planners also want assurances that Dory will be in attendance. 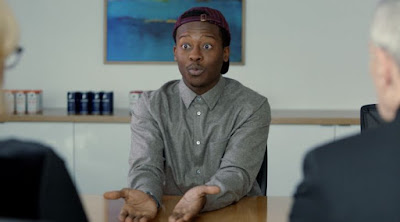 Finally, some subplot potpourri. First off, Julian (Brandon Micheal Hall) is back. Remember Julian, Dory’s ex-boyfriend? We don’t get his reaction to his former squeeze’s situation, but we do see him hassled and then paid off re: the texts he got from the sexually harassing senator he and Dory worked for last season. This may matter later – we know Dory stole Julian’s missing phone and that April had it on her when Dory shoved her to her death – but here, it felt superfluous and out-of-nowhere. Also, we see Cassidy focus group-ing Chantal as a potential witness, and one woman’s negative description of Chantal as “sticky jelly on [her] fingers” is just perfect.

So that’s the midpoint of “Search Party’s” third season. What are your thoughts so far? And which of these episodes worked better for you – “A National Affair” or “Public Appeal?” Please come share in the comments section.

June 8, 2020 Road Dog One
[ad_1] Overnight Cable RatingsThese will be posted later around (9pm-10pm GMT)About the Daily RatingsEach day (except Sunday) during the main
Hot News

May 15, 2020 Road Dog One
[ad_1] "There's nothing more liberating than to realize you don't have to live up to anything anymore," Betty Broderick chillingly

Joker Was the U.K.'s Most Complained About Movie in 2019